Didn’t think i’d ever wear this kit again but today I found myself representing GB at the World Mountain Bike Marathon Championships in the Dolomites. 62km and 3500m of the steepest climbing imaginable. So beautiful. So sore. Gridded 66th out of 72 riders (that’s what happens when you "retire") but clawed my way through the pack to finish 35th. Respectable I think. I am now not such a pretty sight.

Like Loading...
When Markus Stitz emailed me suggesting I consider riding The Capital Trail it took me about a second to agree. Since giving up the narrow world of xc racing after the Commonwealth Games in Glasgow I’ve been reunited with the dim and distant concept that it’s all about the ride as opposed the heart rate training zones. I’m having a ball!

having said ball on the Capitall Trail, near Lauder

Luckily I have some friends who feel similarly and so Jenny, David and I made the trip to Edinburgh from our home town of Inverness to take our sleeping bags for a massive ride in the hills.
Our preparation wasn’t flawless. We were already feeling a little wobbly from a late night spent drinking wine with the legendary Emily Chappell (who incidentally had already ridden up from London and was borrowing a mountain bike from me in order to join in the Capital Trail fun).
Also, I couldn’t figure out how to switch on my borrowed GPS.
But at 8am on Saturday morning, the 90 assembled bike packers on Portobello Beach started rolling their way down the promenade while I prodded wildly at buttons and asked the GPS politely not to beep so.

The pack soon got spread out and I found myself in a group of 4 guys all going at a similar speed. We lost each other on the way into Melrose. This might have had something to do with my inability to read the GPS but I had managed to switch it on by then so was feeling pretty pleased with myself. I rode straight through the town that was buzzing with a book festival and pressed on into the Yarrow Valley alone.
I won’t go into too may details about the chafing I began to suffer on the climb out of Selkirk. Suffice to say a Buff makes a pretty good bra in an emergency. I’d like to communicate that this was what I was doing to the young couple who watched horrified as I contorted myself into it atop the Three Brethern around 4pm. After my adjustments, I caught the 2nd placed rider and rode / pushed with him over Kirkhope Law and into Peebles.

It’s fair to say that taking all the jumps on the red descents at Glen Tress might have contributed to the demise of my Alpkit saddlebag. After jamming it in my wheel for the third time there was nothing for it but to limp down to the garage in Peebles and make a bungy repair. Once the bungys were on it just seemed easier to ride the remaining 50 miles into the night to reach Edinburgh than to stop and get my bivvy bag out. Reason. Right out the window.

By this time David had popped up and we pressed on out of Peebles together having spent a happy half hour sprawled on the forecourt of the Peebles garage surrounded by coke cans, flapjack, pasta salad and bungy packaging. It was 8pm.

the photo’s not blurry, he actually looked like that

There is nothing better than the feeling of flow you get riding next to your chum on a shared mission. We descended out of the Pentlands like a pair of happy dolphins completely in sync with each other and without words.
We rode for a while with an otter along the side of the Glencourse reservoir before it realised we were being dolphins and scarpered.
Our last push up from Flotterstone to begin our descent to the Water of Leith and our highway home used up our remaining gunpowder and we had a small sense of humour failure while we wiggled about the wet, dark city streets avoiding drunk people and taxis. Surreally we found ourselves trundling down the Royal Mile amidst 1000’s of women on a moonlight march in their bras raising awareness for breast cancer. They looked at us like we were bonkers. The cheek.
It was with no small amount of relief David and I found ourselves being blown along the portobello beach promenade back to our start point at 1am on Sunday morning. 17 hours after we began and in 3rd and 4th place respectively. A little more tired and covered in cow poo than we had anticipated, we bundled our bikes into his car and went in search of a shower and a bed.
The next day I excavated myself from my borrowed bed and got back on my bike. I limped back to the beach and spent the whole morning drinking coffee and chatting to Emily who had ridden strongly for 70 km to Lauder before the bike I had lent her fell apart. Soz? We welcomed ashen faced rider after rider as they dribbled in mumbling their need for coffee and bacon rolls. Jenny arrived in at lunchtime which was cause for some celebration so the assembled congregation moved to the pub and coffee gave way to beer.
With the Portobello promenade littered with bikes of all shapes and sizes and covered in all manner of packs, a group of dirty, happy bikepackers sat drinking beer in the warm sunshine debriefing their rides.

A perfect weekend if you discount the 3 hour drive north we then had to make. Extra points for Designated Driver David.
The Capital Trail was a fantastic ride through some beautiful places with a real mix of terrain and people. My thanks go out to Markus for all his organisation and to everyone who stood on that beach with me at 7.45am that Saturday and reminded me what bike riding is all about. 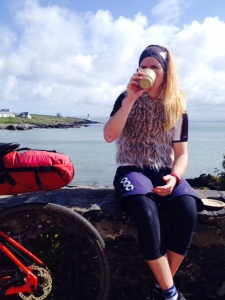 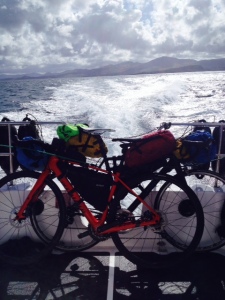 After a 2nd place finish at the British Mountain Bike Marathon Championships in May I had all sorts of plans including the Highland Trail 550 and The Glen Tress 7 that, for a variety of reasons, didn’t happen. Then last weekend, I thought my entry to the Enduro World Series at Tweedlove in Peebles was going to go the same way. Competing in a world series event in any endurance sport isn’t the most chilled way to spend a weekend. And I had a cold. And I am “retired”. And this is full on downhill nonsense against the fastest women in the world. And with wobbly post viral legs even getting round the 8 stages was going to hurt. And. And. And…

It’s about now you get an insight into the trap that is the mind of the competitive athlete. Racing makes me feel alive + racing makes me afraid = I can’t win either way. The voice telling me I was ill and out my depth nearly got me in the car and up the road before the racing even began on Saturday. I could feel the relief hovering about just waiting for me to make the decision not to race but I’m experienced enough to know that the relief feeling would be short lived and would be quickly replaced with an empty flatness. So I raced.

What followed were 2 of the most fun, frightening, fast and full on days of racing I’ve experienced in a long time. I thought;

“Enduro- mostly downhill, minimal breathing required so my snot factory of a head won’t be a problem”.

Oh no n-n-n-no no. Each stage went more like this;

Day one hit 2 downhill trails at Innerleithen and then 2 on the other side of the valley above the golf course. Combined with about 40km of transition riding and 4 big climbs, I was happy and relived to finish the day in one piece and having ridden 2 of the stages well.

Enduro learning point no. 1: Don’t try too hard. You’ll just mess it up. With this hard won new learning I was keen to press on with Day 2.

Day 2 was out of Glen Tress. I woke up feeling pretty rubbish but the race organisers had shorted the day to 2 stages rather than 4 due to the weather. I could manage that. I rode up to the mast and slid down stage 5 on my bottom. Stage 6 went better and I clawed back some time over the other riders to finish Round 3 of the Enduro World Series in 21st place! Current World Champion Tracy Mosely took another convincing win from her rivals. She texted me later “Bit more pleasant than XC?” she enquired. I’m not sure pleasant is the most appropriate word to use in connection to any kind of racing but I’m so glad I didn’t get in the car. 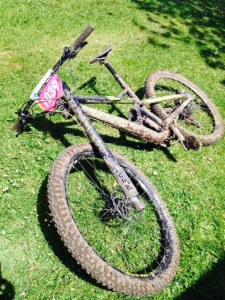 This weekend I’m off on a whisky distillery tour for #seekandenjoy. More soon…